A Bond that Continues to Grow

Over a year and a half ago, I welcomed an adorable puppy named Maeve into my heart and home. Being a Standard Poodle, she learned the basic commands quickly (sit, down, stay, come, and touch), and learning how to walk on a leash was going well. When she was four months old, everything changed. Seemingly overnight, Maeve became an entity of chaos (misbehaving, not listening, and running away), and even all of the progress with potty training flew right out the door. Nothing was going right and I was having a mental block (likely caused by lack of sleep and frustration) on how to get back on the path to success. I reached the point where I loved Maeve, but I did not like her very much.

That is when I enrolled in my first class at Training Spot, PUP2 (in April 2018). The goals I set out at the first meeting were to build a better bond, communicate with Maeve, and stop the chaos. We struggled the first few weeks of class. I fully admit being comforted by the fact that other puppy parents were also struggling through the same stage as me. Tara and Keanna were always positive and offered suggestions along the way. By the last two classes something clicked (besides the clicker) between Maeve and I. We became a team.

Since the end of that first class, the bond between Maeve and I has continued to grow. We have zoomed through all the group classes offered, with a repeat of DOG 401 since Maeve was going through a fear stage the first time around. Some weeks were better than others in terms of how well we worked together and our progress. A little over a year later, we have worked with everyone at Training Spot. By working with different trainers I feel like we both received a well rounded education and a solid foundation that we were able to build off of. One thing I have learned is that there is no “one method fits all” when it comes to training. There is always another method or technique to try and all of the trainers are happy to help. Figuring out what works best for you and your dog may take time and undergo several frustrating periods, but the reward is worth it. I was able to learn that Maeve loves to be challenged and loves to work on training everyday. I always know that when she wants to start working because she reminds me with a poke of her nose and then a quick wag of the tail as soon as I look at her. 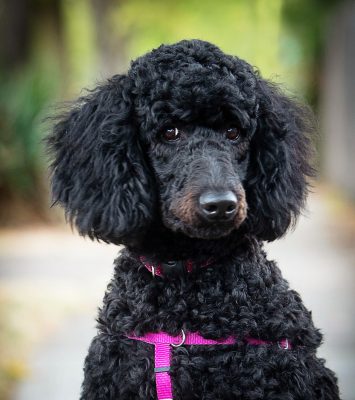