Getting to Know Him 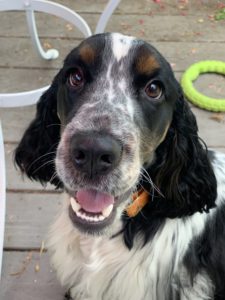 Almond eyes, wiggly butt and puppy breath. It was love at first sight when I met my long-awaited puppy. I’d raised puppies before so I was prepared. I knew how to provide a mentally-stimulating-training-rich-environment appropriate to his developmental level. I was ready with treats, beds, crates, and a slew of stimulating toys for his pleasure. And best of all, this was the first puppy I’d raise after my retirement which meant I’d be able to leave him periodically to have fun and not just go to work. Then the universe laughed – don’t be so sure about that.

At first it was challenging as it always is with a new baby. House training, play time, teaching manners, and constant monitoring so nothing bad happened. My little boy, Pippin, was sweet and lovable and had over-the-top baby energy. As I had done with all my other puppies, I had a plan for getting him used to being alone. I put an exercise pen in the kitchen with a little turf “bathroom” area. There was a crate in the pen with a snuffle mat to sniff and relax on and the door was removed so he could come and go at will.  And of course water, toys and a puppy kong filled with good stuff to lick. I planned to start with a short period and build up. The first time I left, I turned on some music and went out without fanfare. When I returned a few minutes later I was surprised to see he had pooped in his play area and everything in the exercise pen was strewn about, but I thought maybe it was within the normal range of puppy behavior. After that day, however, I noticed he howled and protested whenever I left his presence. He seemed a little frantic about it all. The next time I left the house I turned on my recorder so I could hear what went on. I was gone for just a few minutes but there was a lot of caterwauling. At that point I still wasn’t overly concerned because one of my previous dogs had been very vocal and howled when I left, but with careful building up of duration she tolerated my leaving and was content to listen to NPR and nap until I came home. I carried on.

I continued to leave for very short periods hoping he’d acclimate but it didn’t seem to be getting better. I decided to try something different. Pip loved his crate at night. He went in eagerly and slept soundly so I thought he might feel more secure in a crate when I left. Thank goodness I turned on the recorder. When I came home I noticed that he had pooped in the crate and it was a stinking mess. My poor little guy looked crazed. My other dog did as well, she wasn’t enjoying life anymore than he was. When I listened to the recording I heard nonstop frantic howling, barking and protesting. Instead of getting better it was much, much worse. Time for professional help.

Two days later Pip and I met with a behaviorist. She did a thorough assessment based on my report and her observations. Pip looked terrible. His coat had lost all its sheen and was full of dandruff. A sure sign of stress. The behaviorist had me put him in an exercise pen and sit right next to him while we talked. When I stood up and took one step to the side he started panting and became stressed. The conclusion? My little dude had Separation Anxiety. I had hoped for a simple answer and straightforward solution. Instead, my world turned upside down.

Separation anxiety is an emotional disorder in dogs that ranges from mild to severe. It’s not the same as a dog who prefers to be with his pack and whines a bit when his human leaves. Oh no, separation anxiety is serious business. While its causes are unknown, risk factors include early separation from the litter, frequent or sudden changes in living situation, or a traumatic event. But many dogs have none of the risk factors and still develop it. Symptoms may include restlessness, an inability to eat, panting, drooling, pacing, lip licking, cowering, vocalizing, urination and defecation, attempts to escape, destructive behaviors, and even self-mutilation. It’s like a full throttle panic attack that lasts until his human returns. Dogs are not being spiteful or disobedient, they’re terrified. They will not just “get over it” if you force them to be alone. It’ll get worse. They will not outgrow it. Punishment, never a good idea for any behavior problem, will make it worse. It requires specialized treatment and a human who is willing and able to invest time and energy to carry it out.

All behavioral programs have similar elements at their core. Dogs require appropriate exercise. Enough rest and sleep. Healthy food. Mental stimulation and enrichment. I was ahead of the game on those. Next step, a medical evaluation to rule out any underlying medical conditions. All good there. Then an evaluation with a specialized vet behaviorist. Pip’s behaviorist suggested using an antidepressant to help calm his nervous system. I’m a psychologist and I understand how those drugs work. I know they can be highly beneficial but I was also concerned about the effects of early medication on a developing brain. The vet was more concerned about the effects of ongoing trauma, specifically the high levels of anxiety and panic, on his developing brain. So Pip started Clomicalm, a doggie formula of a human antidepressant. I needed some too.

Meanwhile I started reading, recording data, and trying everything under the sun short of running naked under a full moon. I would have done that too if I’d thought it would have helped. Things that didn’t seem to work included CBD oil, lavender aromatherapy oil, a Thunder shirt, an Adaptil calming collar, and several others that I have mercifully forgotten. I even tried a life-size mannequin with a “beating heart” dressed in my clothes. My pup was anxious but not stupid. He liked the mannequin, but knew it wasn’t me. Having another dog didn’t make a difference. I started mainlining chocolate to soothe my nerves.

I also started working the desensitization protocol. Let me tell you, it is not for the faint of heart. The key component is that you never put the dog in a position to have another panic attack. You always work below threshold, below the level of over-arousal. That meant I couldn’t leave him alone. Not ever. I didn’t have others who could stay with him regularly so no more life for me. No lunches out. No movies. Nothing. If I went anywhere, he went. If I needed to buy groceries he had to be in the car. For some reason many dogs with separation anxiety tolerate being in the car for short periods. I recorded him in a crate in the car to be sure and he was fine. Go figure. But it was summer, so that option was limited to early mornings or late night. If I had an appointment, I hired a dog sitter. Simultaneously I taught Pip to “relax” on a mat while listening to calming music for dogs. I worked on getting him used to departure cues (picking up keys, putting on coat) and actual leavings. At first he would protest and fling himself against the door as soon as I went out, so I started with walking to the door and returning to what I was doing. Eventually I touched the doorknob and returned. Then opened the door, closed the door. You get the picture. Slow and steady. No drama. Day after day. Month after month. I went from not being able to step out the door to going out for three seconds, 10 seconds, and so on. Building slowly and trying not to bash my head on the wall along the way.

I’ll be honest, this has been life changing for me and I don’t mean that in a good way. It’s been an emotional roller coaster of anger, despair and hopelessness. I seriously considered sending him back to the breeder. If I hadn’t been retired, I probably would have had no choice. I’ve felt isolated and am sick to death of spending every minute with my dogs. This is not what I envisioned when I got that sweet little puppy. My life has turned into an all-dogs-all-the-time soap opera. No spontaneous outings. No travel. If I go he goes. Yes, we’re making progress, but this is an issue that I’ll have to be aware of and manage for Pip’s entire life. When you have a dog with serious behavioral issues, there is no quick fix. No magic wand. It requires patience and consistent training and management 24/7. You’re in it for the long haul.

Pip is now 20 months old and in the throes of adolescence. In spite of medication and consistent training he is still amazingly hyper and distractible and impulsive. But there is progress – I can now leave him for two hours. I was finally able to go out to lunch with a friend and leave him at home. I watched him on my remote camera to make sure he was calm and all was well. I do love him. He is sweet and affectionate and makes me laugh. I’m hoping to be able to go out to a movie one day. For now, we hang out on the couch and watch movies streaming. He especially likes doggie movies.

Many thanks to Jennifer Biglan CDBC, KPA CTP, CPDT-KA, Certified Dog Behavior Consultant extraordinaire for her expertise and the patience it took to listen to my frustration. She saved us.