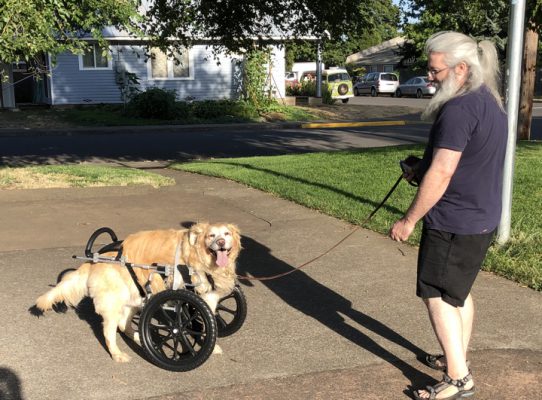 by Stephanie Harper and Sprocket

Sprocket came to us as an 8 week old handful of fuzzy love in December 2009 via an ad in Craigslist for a free Golden Retriever puppy. He was born with a congenital defect to his right front leg. At a year old he had his right leg removed, after a year of surgeries trying to save it. He went from being a medical dog to a happy, normal dog.

We knew that at some point the wear and tear on his left shoulder would start to become a problem, and so I spent a number of years investigating front wheel chairs for larger dogs. I found Eddie’s Wheels in Massachusetts which has been making front and rear wheelchairs for a long time. Of course, being on the west coast (Alaska initially and now Oregon) it makes getting a custom wheelchair MUCH more complicated. And front wheel chairs are much more complex than rear wheel chairs. I contacted them several years ago and they had plenty of other customers who were far away so were very willing to work with us.

Last year Sprocket’s shoulder was starting to bother him more, and he was putting on weight, due to less exercise, which becomes a vicious cycle in dogs with joint issues. I contacted Eddie’s and ordered his chair. We spent several weeks going back and forth with photos of measurements and emails ensuring that the wheelchair would fit him perfectly. Then I contacted the Training Spot and asked if they had a trainer who could help us train him to use it.

And we were introduced to Carmaleta! This was her first experience with a front wheel chair, so we spent a lot of time with pictures and movies going back and forth between Eddie’s and us as we figured out the adjustments needed.

The most important part of the process was Carmaleta’s focus on ensuring that Sprocket was being asked rather than told what to do, and that we stop when he was no longer willing or too stressed.  We went at Sprocket’s pace, from just getting him accustomed to his “go cart” and willing to be around it, to being placed in the cart without being hooked up, gradually increasing the time, to being hooked up briefly, and slowly progressing. Carmaleta realized he was getting too tired doing a full hour so we shortened the sessions and he progressed much faster! We had a few exciting and somewhat acrobatic moments, but Sprocket not only is not afraid of his wheels, but he really gets excited when he knows we are going to work with Carmaleta!

This has been a wonderful experience, and we are so grateful to find someone willing to work as hard as she has worked to help us give Sprocket the best quality of life we can give.